I couldn’t be certain of Joschi’s particular destination, but mine would be the village of Weisstannen, by virtue of having earlier booked a room for the night.

My new friend and I walked together the entire day. The path contoured high above the Seez, a charming river whose waters would eventually reach the Lake of Zürich. The belvedere offered commanding views to the head of the valley and the rugged peaks separating the cantons of St. Gallen and Glarus. A thin, ribbon of a waterfall hugged the opposite valley wall, its fragile appearance belying the roaring crash into the Seez below. 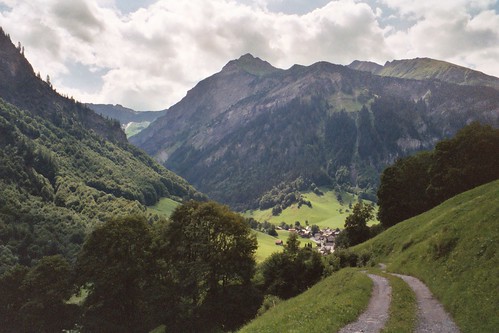 Joschi never strayed more than a few paces from my side. He instinctively knew which branch to choose when the path forked, and I imagined that he must frequent this valley. He walked with determination and displayed great enthusiasm when I offered him bites of my lunch.

We’re not so different after all.

On reaching Weisstannen, I located my hotel and introduced myself to the proprietors, an older couple who had been relaxing outside the hotel beneath a canopy. The man’s rough appearance suggested a life spent mostly outside performing difficult labor, while his considerably gentler wife smiled in the sort of way that often heralds the arrival of cookies.

“Is he yours?” asked the man, motioning to Joschi, who sat down next to my feet.

It occurred to me that bringing a dusty pet into the foyer of a hotel might not be the best way to present myself as a guest.

“No,” I said, “he joined me a few kilometers back. I think he might belong to someone here.”

I pointed to the tags dangling from the dog’s collar. The scruffy man looked down and in an instant of recognition approached for a closer look.

“Flums,” he muttered, referring to a town lying a handful of steep miles to the north.

The man invited me to have a seat and then picked up the phone. He launched into his own particular flavor of Swiss German, a collection of dialects whose enunciation, even to native speakers of High German, resembles an unfortunate throat condition. He nodded with a vigor completely out of proportion to the quantity of words that actually issued from his mouth, but after a time, he placed the receiver back in its cradle.

“I contacted the authorities in Flums.  His owner will be here in a couple of hours.”