Inspired by a certain show concerning a certain city in the Pacific Northwest, my other half and I recently convinced ourselves that it was time to bring back a bit of the 90s in our own particular way. 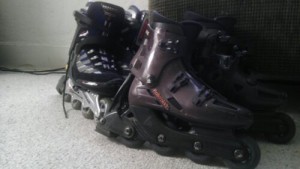 Yes, the time was ripe to dust off the old inline skates, which we would discover, following a decade of storage, could also accurately be described as ripe. I was pleased to find that I had apparently purchased a new set immediately prior to skating’s having gone out of fashion, while Ginny’s specimens offered up a timeless palette of forest green on purple. In the distance, one could hear the gentle whir of an Orange Julius in its formative stages.

And so it was, that on a sunny morning in early June, I donned my skates, rolled out the front door, and, with great fanfare and enthusiasm, tipped forward onto the front lawn.

I am not naturally athletic. That I have made it nearly 35 years without having broken a bone or lost a limb ranks with Congressional accomplishment in terms of probability, and any physical accomplishments I claim are more the result of stubbornness than of inborn talent. Gin, on the other hand, can ski, swim, and skate all at the same time, often while talking on the phone.

So, having stood up and regained my balance, I spent the next half hour attempting to catch up to my fiancée. Her efficient, coordinated movements supplied much needed Yin to the Yang that was my flailing, swearing, and failing to brake. Casual observers could have been forgiven for thinking I had been drinking, which, regrettably, I had not.

In the end, we executed a surprisingly uneventful loop around Old Town Fort Collins, including several grade crossings of railroad tracks and Himalayan descents and ascents of those little, bumpy, rubbery bits that carry the sidewalk down to the road. I made it home in one piece, thankful for having maimed nothing more than my pride.

I’m stubborn, and I expect we’ll probably give it another go soon. So if you’re out and about in Fort Collins, keep your eyes open and remain alert. And if you see a couple gracefully gliding hand-in-hand down the street, you may breathe easily because it’s definitely not us.